Creator of the World's Most Advanced Robot

David Hanson develops robots that are widely regarded as the world’s most human-like in appearance, in a lifelong quest to create true living, caring machines. To accomplish these goals, Hanson integrates figurative arts with cognitive science and robotics engineering, inventions novel skin materials, facial expression mechanisms, and collaborative developments in AI, within humanoid artworks like Sophia the robot, which can engage people in naturalistic face-to-face conversations and currently serve in AI research, education, therapy, and other uses. Hanson worked as a Walt Disney Imagineer, both a sculptor and a technical consultant in robotics, and later founded Hanson Robotics.

Sophia is Hanson Robotics’ most advanced human-like robot, created by combining breakthrough innovations in robotics, AI, and artistry. She is endowed with remarkable expressiveness, aesthetics and interactivity, and can simulate a full range of facial expressions, track and recognise faces, and hold natural conversations with people. Sophia personifies Hanson Robotics’ greater mission of developing intelligent, empathetic robots that make a positive impact on humanity and co-create a better future for all.

“I had a fascination with art, science fiction, and philosophy, dreaming of what robots could be. I imagined that if artificial intelligence ever did match human intelligence that it would re-design itself to be ever smarter, ever faster, you would have something like a Moore’s Law of super intelligent machines.” David Hanson, Ph.D., Founder & CEO 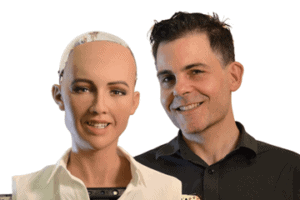 Creator of the World's Most Advanced Robot